The Department of Veterans Affairs will require many of its frontline health workers to be vaccinated, a senior offŌĆtwitter.com/i/web/status/1ŌĆ”Bm

Civilian casualties in Afghanistan reached record levels in the first half of 2021, the United Nations says in a reŌĆtwitter.com/i/web/status/1ŌĆ”bz

The US wins the menŌĆÖs 4x100m freestyle swimming relay at the Tokyo Olympics. ItŌĆÖs the fifth gold medal for the UStwitter.com/i/web/status/1ŌĆ”PuwGmZ 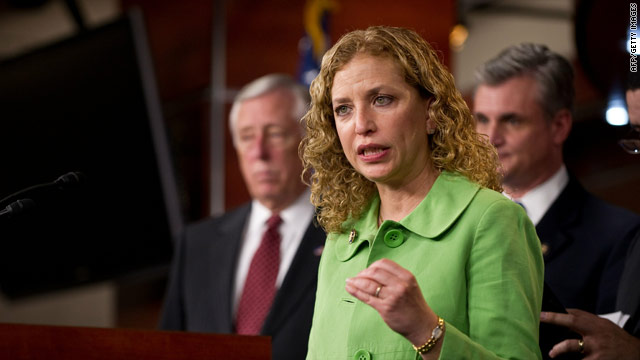 Rep. Debbie Wasserman Schultz of Florida will become the chairwoman of the Democratic National Committee.
April 6th, 2011
10:55 AM ET

The Florida congresswoman will be named chairwoman of the Democratic National Committee, replacing Tim Kaine, who is running for the Senate from Virginia. Two women have previously been the chairs of the DNC: Jean Westwood in 1972 and Debra DeLee in 1994 and 1995. Debbie Wasserman Schultz has risen in the ranks of the Democratic Party since she took office in 2005. The congresswoman is a breast cancer survivor and the mother of three children. Many Americans may recognize her as one of the friends present at the hospital when Rep. Gabrielle Giffords first opened her eyes after being shot in January.

The former Pennsylvania congressman has arrived in Libya to meet with Moammar Gadhafi. Weldon wrote in a New York Times op-ed piece, "I've met him enough times to know that it will be very hard to simply bomb him into submission." Weldon wrote that he's going on the invitation of Gadhafi's chief of staff and called for an immediate U.N.-monitored cease-fire, "with the Libyan army withdrawing from contested cities and rebel forces ending attempts to advance."

The Warren, Michigan, native found a kidney donor for her husband on Facebook. Though an infrequent user of the popular social networking site, Kurze wrote a post lamenting her husband's deteriorating condition, according to the Detroit News. She wrote, "I wish a kidney would fall out the sky," and "If someone knows a living type O donor, let me know." Not long after, Ricky Cisco replied, offering up his kidney.

The 10-year-old from Pittsburgh gave the Super Bowl ring he bought with his college savings for $8,500 back to retired Chicago Bears player William "The Refrigerator" Perry. Perry had to sell the ring several years ago after being diagnosed with an autoimmune disease and falling on hard times. Forrest wanted to buy the ring and give it back to Perry, and the avid sports memorabilia collector told ESPN on Monday, "When I Googled Mr. Perry after I got the ring, I saw he had the disease and went through rough times. And I thought he needed it more than I did."

Moderna will expand the size of its Covid-19 vaccine trial in younger children, the company said Monday, and will nŌĆtwitter.com/i/web/status/1ŌĆ”4D
cnni

6:40 pm ET July 26, 2021 RETWEET
Tropical Storm Nepartak could impact the Olympic Games as it brings up to 150 mm (5.9 inches) of rain to some regioŌĆtwitter.com/i/web/status/1ŌĆ”UA
CNNweather