Part of Illinois development like 'a slate wiped clean' after tornado

Brady Street is a quaint development in Harrisburg, Illinois. A short street, full of pretty, cream-colored duplex homes. Built identically, many were just finished in November. But as the sun rises, the day after Harrisburg's deadly tornado what's clear are the scars, and the death and destruction in its wake.

The newest section of the development isÂ like a slate wiped clean. All that remains of those home are their foundations.

This is a spot where several people died. The wind pushed all the debris, and the homes, across the street and into the neighboring houses.

It's a staggering example of the strength of a tornado, and its randomness.

END_OF_DOCUMENT_TOKEN_TO_BE_REPLACED 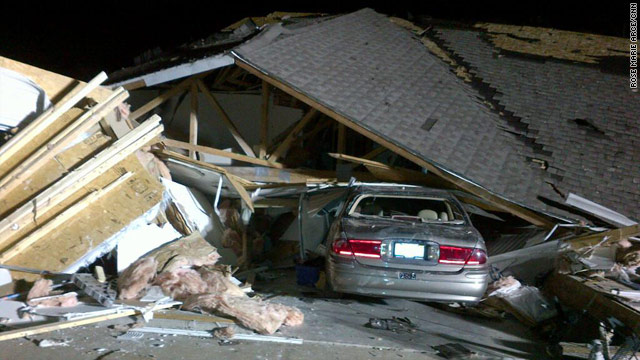 We headed into the disaster area, driving northeast from St. Louis, where you could feel the pockets of hot and cold air buffeting each other. Early reports were that six people died in Harrisburg, Illinois, so that's where we were headed.

The storm hit Harrisburg, with winds as high as 170 miles per hour, cutting a swath through the city.Â  The mayor described the path as "three or four football fields wide."

The greatest damage was in southern Harrisburg, in the southern part of the state.Â  About 200 to 300 homes are estimated to be damaged or destroyed, and the Harrisburg Medical Center was also hit. The tornado tore through a wall and left several patients' room open to the elements. END_OF_DOCUMENT_TOKEN_TO_BE_REPLACED

Editor's Note:Â CNN's Soledad O'Brien and Rose Marie Arce were given rare access last week to the entire complex under construction at ground zero for an upcoming CNN documentary, "Beyond Bravery: The Women of 9/11." Here are their impressions after touring the site:

New York (CNN) - You have to walk downhill to get into ground zero, which is an odd feeling because the World Trade Center complex was all about looking up.

It looks like a noisy, massive construction zone from the outside, but inside you can see how much progress has been made as the 10th anniversary of September 11 approaches.

The public has gotten few glimpses of what's unfolding here, mostly during ceremonies or when dignitaries have visited or the waterfalls were tested.

Filmmakers, photographers and historians duck in to gather material they will unveil in the future. Architect Michael Arad, survivor of a bruising process to design a 9/11 memorial, says he gives occasional interviews alongside the memorial. The folks who work here are very protective of this site.

But last week, Arad gave us a rare tour of the entire complex.

END_OF_DOCUMENT_TOKEN_TO_BE_REPLACED

A statement released by the Turkish Radio and Television Supreme Council said the two outlets did not comply with â€œtwitter.com/i/web/status/1â€¦Medv
cnni