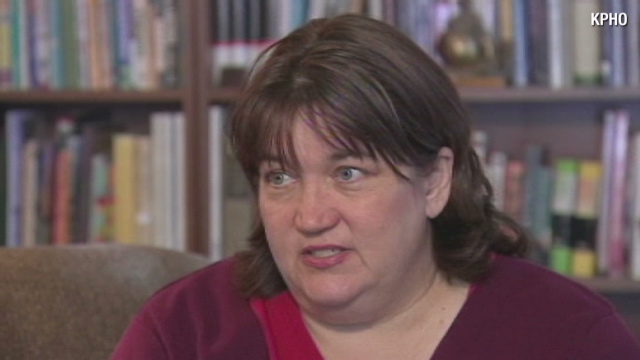 Mary Reid says she sheilded her daughter from gunfire during the Tuscon shooting.
January 12th, 2011
10:20 AM ET

Taking a bullet for your child – It's something you'd expect any mom to say she would do. But this mom took several bullets to protect her teenage daughter from the spray of gunfire that took six lives in Tucson, Arizona.

END_OF_DOCUMENT_TOKEN_TO_BE_REPLACED

Hugh Jackman stunt gone wrong – Wildlife officials say wolverines are moving closer to becoming candidates for the endangered species list. This video may explain why. "X-Men Origins: Wolverine" star Hugh Jackman cut and bruised his eye yesterday when he rode a zipline to the stage from atop the Sydney Opera House during a live taping of "The Oprah Winfrey Show."

Susan Boyle nails it on 'Larry King Live' – Even the grouchiest of bah-humbuggers will be moved by Susan Boyle's rendition of "O Holy Night."

Zakaria checks Glenn Beck's fuzzy math – FOX News' Glenn Beck recently proclaimed that 10 percent of all Muslims are terrorists. CNN's Fareed Zakaria did the math and came up with a slightly different figure.

Scantily clad Santas run for charity – These brave Kris Kringles stripped down to their holiday underthings to run 3 kilometers for charity. We've gotta hand it to these Santas. It takes some serious guts to run through Toronto in winter...in your underpants.

What's in your kettle? There are still quite a few days left in the holiday season, and Salvation Army bell-ringers are receiving generous but unusual donations. A few days ago, it was reported that a rare coin was anonymously placed in a kettle in Dallas, and in Pennsylvania, the organization received a diamond ring and wedding band wrapped in a dollar bill.

END_OF_DOCUMENT_TOKEN_TO_BE_REPLACED

'S' is for Saturday - Which celeb doesn't belong? Betty White, Lady Gaga and Cookie Monster. If you guessed Cookie Monster, you're right. The others have made appearances on "Saturday Night Live," and Cookie Monster wants to join their ranks, even kicking off a Facebook page to further his cause. The insatiable blue puppet also has an audition tape, which he has shared with his Sesame Street faithful.