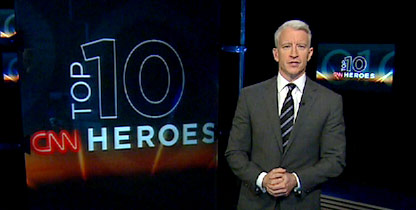 A Scotsman providing free daily meals to 400,000 children, a former child soldier clearing land minds in Cambodia and a Texas builder giving injured vets mortgage-free homes are among the top 10 CNN Heroes of 2010.

The top 10 - remarkable individuals nominated by viewers for their sacrifices and accomplishments - were revealed by CNN's Anderson Cooper at 1 p.m. Thursday on CNN.com.

This year marks CNN's fourth annual global search for everyday individuals changing the world. Since January, the network has aired weekly profiles of CNN Heroes, chosen from more than 10,000 nominations submitted by viewers in 100 countries.

END_OF_DOCUMENT_TOKEN_TO_BE_REPLACED

@TankSchottle Look at you!!!! Amazing
sarasidnerCNN