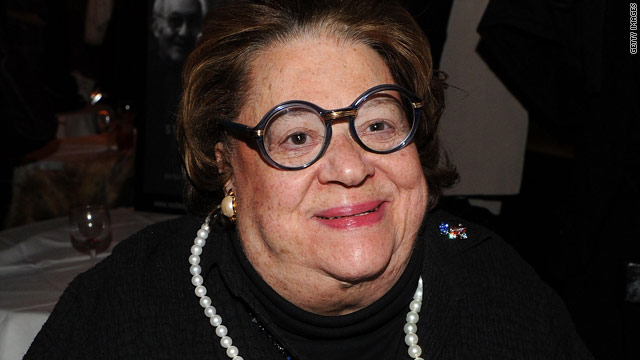 New York City dining doyenne Elaine Kaufman died Friday at the age of of 81 of complications from emphysema.

As proprietress of the eponymous Elaine's restaurant on Manhattan's Upper East Side since 1963, she held court nightly over a star-studded scene that in its heyday, boasted writing royalty like George Plimpton, Norman Mailer, Gay Talese and Hunter Thompson as well as silver screen stars including Kirk Douglas, Michael Caine and Billy Dee Williams.

While the food was widely regarded to be rather unremarkable, the restaurant found a permanent place in pop culture with its inclusion in Woody Allen's "Manhattan" and the recent film "Morning Glory," as well as a notable mention in Billy Joel's "Big Shot." ("They were all impressed with your Halston dress/And the people that you knew at Elaine's."

For non big shots, however, Elaine's - and Elaine herself - could be somewhat inhospitable, relegating non-celebrities (if they could gain admittance at all) to an area nicknamed "Siberia" - far away from the glittery "line," along which was seated more her illustrious clientele.

7:30 am ET December 2, 2021 RETWEET
A new species of armored dinosaur discovered in Chile had a type of weaponized tail not seen before in any other diâ€twitter.com/i/web/status/1â€¦A0
cnni

7:15 am ET December 2, 2021 RETWEET
A group of 11 artists and activists has claimed the prestigious Turner Prize after transforming a gallery space intâ€twitter.com/i/web/status/1â€¦Na
cnni

6:45 am ET December 2, 2021 RETWEET
This man had a Taj Mahal replica built for his wife as a sign of love. Artisans from across India worked on the homâ€twitter.com/i/web/status/1â€¦EB
cnni