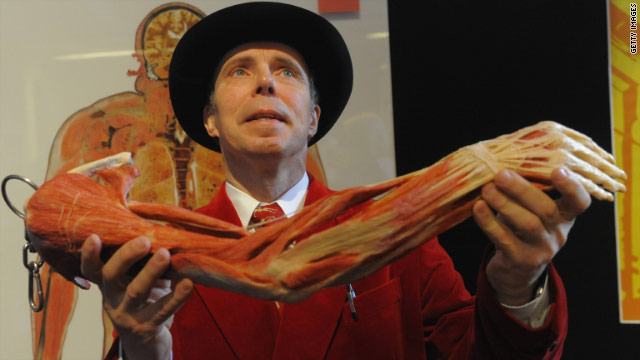 Gunther von Hagens wants to donate his corpse for an art exhibition.
January 5th, 2011
11:35 AM ET

Gunther von Hagens
The German anatomist who pioneered the controversial "Body Worlds" exhibition announced that he plans to display his own corpse in the art show. Von Hagens¬†was diagnosed with Parkinson's Disease. The 65-year-old, dubbed "Dr. Death" for reportedly trying to sell body parts online, told Germany's Bild¬†amm¬†Sontag: "I want to prepare myself for the plastination of my own body and determine the place where I want to be exhibited after my death."

Dawn Simorangkir
The fashion designer is suing rocker Courtney Love in a groundbreaking social networking defamation suit set for trial in Los Angeles, California, on¬†January 18. The suit concerns whether Love should be held liable for statements she made about Simorangkir¬†on Love's Twitter account and other online platforms. Simorangkir¬†demanded payment from Hole (Love's band) for a few thousand dollars worth of clothes. On March 17, 2009, Love tweeted insults at the designer. The singer's tweets appeared in on the feeds of her 40,000 followers. Love called Simorangkir a drug dealing prostitute with a history of assault and battery who was attempting to capitalize on Love's fame. The tweets also accused the fashion designer of stealing from Love. The Twitter tirade, along with others Love posted on MySpace and Etsy.com over four days, are the basis of the suit.

Ryugo¬†Nakamura
The 14-year-old junior high school student in Okinawa, Japan, has directed a feature film that will have its commercial premiere this weekend at theaters in Tokyo and Yokohama, according to a report in Asahi Shimbun. The 80-minute film, titled "Yagi no Boken," is the story of young boy and a goat on Okinawa in which the boy learns what¬†human consumption of animals entails, Asahi reports. Although professionals wrote the script and handled the filming, the teen's direction made it more authentic, the film's producers said. For instance, in one scene that called for the young main character to buy a sandwich for breakfast, Nakamura¬†had him purchase something cheaper. "An elementary school student would not buy a sandwich because he wants to use his allowance as he likes," Nakamura¬†told Asahi. Yuichi¬†Ide, the film's producer, said the teen can be a successful director. "He is instinctively aware how to entertain the audience," Ide told Asahi. The boy, who has made 30 short films himself, said he enjoyed the directing experience. "Even though I was a bit shy to tell my opinions to adults, it was fun to make a beautiful film with crew members who have expertise," Ashai quoted him as saying.