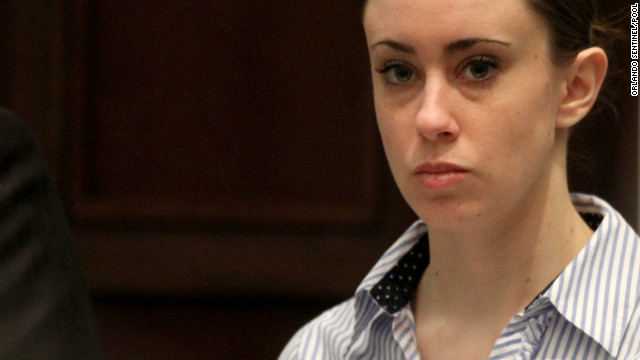 Two of Casey Anthony's convictions of providing "false information to a law enforcement officer during a missing person investigation" were
thrown out today, while an additional two convictions on the same counts were upheld by Florida's 5th District Court of Appeal.

Casey Anthony's lawyer Cheney Mason tells In Session correspondent Jean Casarez that when he called Anthony to tell her the ruling, Anthony
said, "We keep fighting."

The next step in the process would be to appeal the remaining two convictions to the Florida Supreme Court.

In 2011, a jury found Anthony not guilty of first-degree murder and the other most serious charges against her in the 2008 death of her 2-year-old daughter.

Nancy Grace: I don't have to agree with Casey Anthony jury

HLN host Nancy Grace has been credited with making the Casey Anthony case a national story. She has been outspoken in her belief that Anthony is guilty of murdering her daughter, despite a jury's verdict. She's also a former prosecutor with strong opinions about what went on in the Florida courtroom in the past few weeks. She spoke with CNN.com about how she would have tried the case, the "CSI effect" on juries and why she doesn't "give a fig" about what Anthony's defense team thinks about her.

Grace: As I’ve always said since 1984, when I started trying cases, you win or lose your case - it’s all over at the end of voir dire (jury selection). I’ve always believed that. It’s true. I think this jury hamstrung the state. The state absolutely put up a good case and I get real fed up when I hear this is a circumstantial case. Most cases are circumstantial because rarely do people commit felony crimes in the open. Murder, armed robbery, you do it in private, in secret, so very rarely is there an eyewitness or direct evidence to a crime.

CNN: Watching a case like this, do you miss the courtroom and prosecuting cases?

CNN: As a former prosecutor, if you could retry this case, how would you do it differently?

Grace: I think they did such a very good job it’s hard to attack anything they did. I think maybe I would’ve taken a different tack in jury selection but that’s really it. There were some obvious problem jurors: You had one on there with an arrest for DUI; another with an arrest for drug paraphernalia; one whose sister and her boyfriend beat up their father; one juror who said she could not judge. Why the heck would you not want someone off the jury who cannot judge? The jury is the sole judge of facts, evidence and the law. Who the heck wants someone who can’t judge? They tried to get rid of them but were not successful. I think the jury was snakebitten from the get-go.

CNN: What do you think is the most important piece of evidence that the jury never saw or heard?

Grace: I don’t believe they saw all of the audiotapes or heard all the videotapes (of Casey Anthony’s jailhouse phone calls). I think the so-called bodyguard or bail bondsman had a lot to offer, his discussions with tot mom when she was referring to Caylee in the past tense before her body had been found, her being very flip about Caylee, being more concerned about a hot guy flirting with her on Facebook. Evidence of that nature.