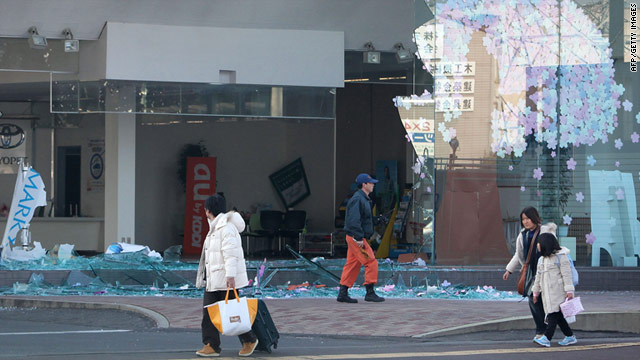 Quake aftermath: 'You just have to survive'

Millions of people have been affected after a devastating earthquake and tsunami hit northeastern Japan on Friday. Hundreds have been killed, and many more are¬Ýmissing as¬Ýaftershocks rock the country. Are you there? Send an iReport.¬ÝHere are some personal stories from around the world:

- Matthew Williams, 23, lives in Shin-Urayasu, Japan but is originally from Newport Beach, California. Williams was at work when the earthquake hit and was stuck there for eight hours until it was okay to for him to walk home. He took these pictures of the aftermath.

"We've been provided some water rations but only about one to two liters and still not sure when we are to get more," he said. "The city has told us we are able to take a bucket to the local elementary school to obtain some water, but the wait is about three hours."

- Yoshi Ikeda, 34, works at the US Navy Base pool in Yokosuka, Japan. He took this video of water flowing out of the pools during the earthquake.

- iReporter Wade Reed was on the U.S. Navy base in Miura City when the buildings starting to shake. It took him more than six hours to locate his wife and son. He said if the tsunami had been as violent in Miura as it was in other parts of Japan, he wouldn't have made it to his family in time.

"I was very worried for my son because his school had just let out at 2:45 and he was heading home. I went to the local train station to only find out that all the trains had stopped and there was no service. I had to walk to get to my wife's work and that took me almost two hours to get to her," he says. "We finally made it home about 2.5 hours later and still had to find my son. He was safe at his school but we again with traffic it took us some time to get to him.

"The Japanese people had fear on their faces and know one knew what was next. But I am lucky because we did get a little bit of the tsunami but nothing like what they got up north. I was very scared but I had to remain calm and think about the situation."

END_OF_DOCUMENT_TOKEN_TO_BE_REPLACED 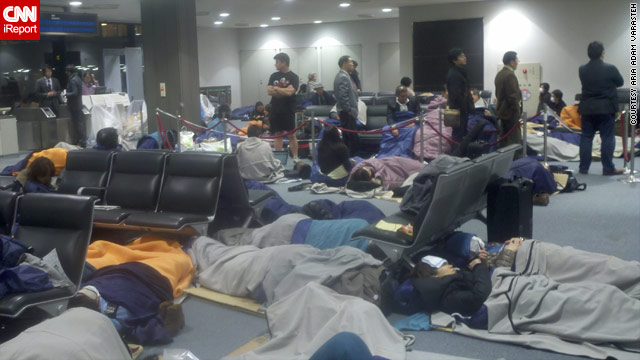 Millions of people have been affected after a devastating earthquake hit Japan on Friday. An estimated hundreds have been killed, and many more are¬Ýplanning for aftershocks. Here are some personal stories from around the world:

- iReporter Christopher Lacey was standing on his back deck, talking on the phone about the events in Japan when he noticed a disturbance in the waters of Richardson Bay, which is part of the San Francisco Bay.

"The waves did not appear to be more than about 3 feet high from my perspective."

- iReporter Kristi Marie Gott narrates what happened when she heard the tsunami warning, in Florence, Oregon early this morning. "I wanted to let people see what the tsunami surges looked like on the Oregon Coast near Heceta Head Lighthouse. To a local person it was amazing to see the ocean surge back as the water withdrew, leaving the shallows and rocks visible, then surge forward again covering them all the way to the cliffs. I go there all the time so it was clear this was very different from the usual waves or tides."

- iReporter Travis Richardson, of Fremont, California, was evacuated from his hotel in Tokyo and recorded some images of a massive fire nearby.

"We were forced to leave the hotel and stand outside, I could see the big billowing dark smoke coming from I'm guessing an oil rig possible approximately 4 to 5 miles away and pulled out my iPhone to take photos and video. Thought I should document this, everyone was standing outside. When the aftershocks happened they told us to move further away from the hotel and stand in the grassy area between the buildings."