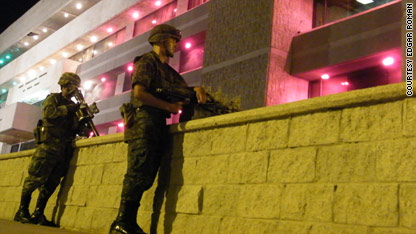 Snipers watch over the celebration of Mexico's Bicentennial in Ciudad Juarez.

Violence provoked by drug cartels in Ciudad Juarez, known as the homicide capital of Mexico, caused Mexico's Bicentennial festivities to be celebrated in silence there.

From the balcony of City Hall, Mayor José Reyes Ferriz led the ceremony Wednesday before an empty plaza under the close watch of Federal Police and the Mexican Army. A helicopter flew overhead as snipers stood on roofs and heavily armed agents guarded points of entry.

Fearing an attack, authorities decided to cancel the popular celebration. The official act was transmitted via radio and television to people who were asked to stay in their homes.

Authorities launched fireworks from six points throughout the city to prevent large gatherings.

Official reports indicated there were no attacks against authorities as has occurred on various occasions since the end of 2007, when drug-related violence escalated to levels never seen before.

With Juarez's cancelation of the popular celebration, thousands crossed the border to El Paso, Texas, to join those living in the United States so they would not miss the celebration.

At least 10,000 people, mostly Mexicans, enjoyed an atmosphere of stability that they have not had in their own country this year.

The event, organized by the Mexican Consulate, had all the necessary elements - flags, traditional music and snacks - which united the large amount of people in celebration.