Peloton recalls treadmills linked to the death of a child and 70 other injuries, saying it was wrong not to do so e‚Ätwitter.com/i/web/status/1‚Ä¶cD

Facebook can continue to block former President Trump but must review the penalty, the company's independent Oversi‚Ätwitter.com/i/web/status/1‚Ä¶vF

The Italian Supreme Court on Wednesday upheld the convictions of 23 Americans who were found guilty in absentia three years ago in connection with the 2003 kidnapping of a terror suspect in Milan.

The Americans, many of whom were thought to have worked for the United States' CIA, never appeared for trial and are not in Italian custody. The Italian government hasn't asked for their extradition.

The case centered on the "extraordinary rendition" of a Muslim cleric, Osama Mustafa Hassan Nasr, or Abu Omar. He was seized on the streets of Milan, Italy, in 2003, transferred to Egypt and tortured, he said. He was suspected of recruiting men to fight in Iraq and Afghanistan and was under heavy surveillance by Italy's intelligence agency.

Prosecutors said he was nabbed by a CIA team working with Italian intelligence officials.

The trial was the first to deal with a practice that human rights groups call "extraordinary rendition." They say the United States has often sent suspects to countries that practice torture. Washington acknowledges making secret "rendition" transfers of terrorism suspects between countries but denies using torture or handing suspects over to countries that do.

A total of 22 Americans were each sentenced to five years in prison for their role in his abduction. Another - Robert Seldon Lady, whom prosecutors said was the CIA station chief in Milan - was sentenced to eight years in jail.

Former CIA analyst Michael Scheuer told CNN in the past that the Italian military secret service had approved the operation involving Hassan, and CIA sources who refused to be named told CNN in 2005 that the agency had briefed and sought approval from its Italian counterpart for such an abduction.

The Italian government at the time - which was led by Silvio Berlusconi - vigorously denied having authorized Hassan's kidnapping, which it called illegal. 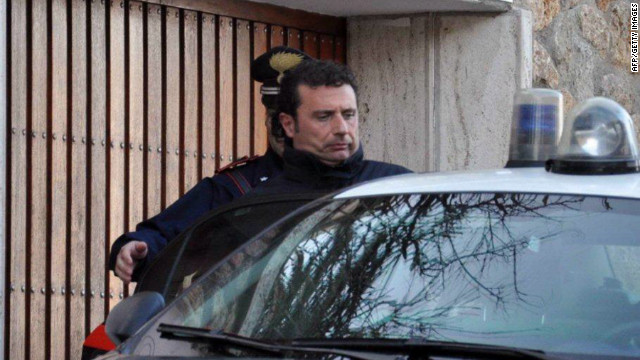 Italian judges released the captain of the wrecked Costa Concordia cruise liner from house arrest Thursday, but ordered him not to leave his home town while the case against him continues, his lawyer said.

Francesco Schettino has been under house arrest in his home town of Meta di Sorrento, near Naples, since January 17.

At least 30 people died when the cruise liner struck rocks and turned on its side off the Italian island of Giglio on January 13.

Schettino faces allegations of manslaughter, causing a shipwreck, abandoning ship, failing to report an accident to the coast guard and destroying a natural habitat, a prosecutor said this year. Giglio is a protected park.

Schettino's first officer, Ciro Ambrosio, and six other officers both on the ship and from the firm Costa in Genoa are under investigation over allegations including manslaughter, shipwreck and failure to report the accident, the prosecutor in the case has said.

No one has been charged in connection with the shipwreck.

The captain of the Costa Concordia cruise liner Francesco Schettino is escorted by an Italian policeman in Grosseto on January 14.
February 7th, 2012
10:05 AM ET

The Italian captain of the shipwrecked cruise liner Costa Concordia must remain under house arrest while investigators look into possible charges against him, a court in Florence, Italy, ruled Tuesday, a defense lawyer said.

The court rejected a prosecution motion that Francesco Schettino be sent back to jail as well as a defense motion that he be set free, according to lawyer Alessandro Antichi.

Schettino was "satisfied" that the court rejected the prosecution's request to send him back to jail, Antichi said. Attorneys will likely wait until February 9, when the full text of the court's decision is published, to decide whether to appeal, Antichi said.

Italy's new prime minister late Sunday proposed ‚Ç¨30 billion ($41 billion) in new taxes and spending cuts over two years, including reductions to future pensions, in an effort to end a budget crisis that has clouded the future of Europe's common currency.

About ‚Ç¨20 billion would come from cuts, including major changes to how Italian workers' pensions are calculated and a one-year increase in retirement ages, Prime Minister Mario Monti announced Sunday night. Italian workers also would see their pensions based on their entire working life, rather than the last three years - a move that could cut the average retiree's pension by about ‚Ç¨100 ($135) per month.

The rest of the package involves a 1.5% tax on financial transactions, a new tax on high-end boats, cars and planes, efforts to crack down on tax evasion and a bid to boost the Italian economy by rebuilding infrastructure.

Organic barley grown in the grounds of the Queen's retreat in eastern England has been used to develop beers, which‚Ätwitter.com/i/web/status/1‚Ä¶cl
cnni

1:46 am ET May 6, 2021 RETWEET
If Australia exports it, China has likely put up barriers to entry this past year, as diplomatic relations between‚Ätwitter.com/i/web/status/1‚Ä¶TT
cnni

1:25 am ET May 6, 2021 RETWEET
"President Joe Biden was between a shot and a hard place. In the end, he chose humanity. ... Ultimately, making vac‚Ätwitter.com/i/web/status/1‚Ä¶h8
cnni

1:15 am ET May 6, 2021 RETWEET
The divorce of Bill and Melinda Gates has sent shockwaves though China, where the Microsoft co-founder has achieved‚Ätwitter.com/i/web/status/1‚Ä¶el
cnni