Ex-officer Brett Hankison is charged with wanton endangerment in the fatal shooting of Breonna Taylor. Two other poâ€twitter.com/i/web/status/1â€¦u4

Dr. Deborah Birx has confided to aides and friends that she is "distressed" with the direction of the White House câ€twitter.com/i/web/status/1â€¦Ul

The Metropolitan Opera announces it has canceled the entire 2020-21 season due to the "ongoing health crisis"â€twitter.com/i/web/status/1â€¦KY

Ahead of an expected news conference on the Breonna Taylor case, Louisville's mayor announces a curfew beginning 9â€twitter.com/i/web/status/1â€¦ra

The long-awaited findings of a grand jury probe into the fatal police shooting of Breonna Taylor will be announcedâ€twitter.com/i/web/status/1â€¦Bn 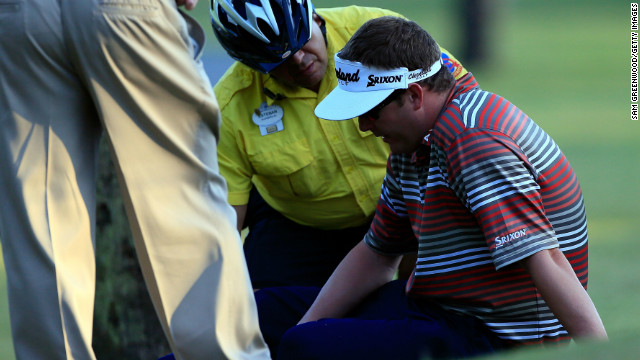 Charlie Beljan speaks with EMS personnel on the 17th hole during the second round of the Children's Miracle Network Hospitals Classic at the Disney Palm and Magnolia course on November 9, 2012 in Lake Buena Vista, Florida. (Photo by Sam Greenwood/Getty Images)
November 10th, 2012
03:36 AM ET

PGA Tour rookie Charlie Beljan was hospitalized Friday after shooting a 64 to take a three-shot lead in a PGA tournament in Lake Buena Vista, Fla., according to pgatour.com, the tourâ€™s web site.

Beljan was rushed to a hospital immediately after the round, complaining of breathing trouble, an increased heart rate and numbness in his arms, the tour said.

Beljan, 28, told the PGA Tour he expects to play in Saturdayâ€™s round at the Childrenâ€™s Miracle Network Hospitals Classic.

The golfer, who had his first child this fall, told his caddie, Rick Adcox, that he thought he was going to die during the round, according to the tour.

Beljan called for paramedics while warming up on the driving range before the round, then again after the ninth hole.

After signing his scorecard, he was taken on a stretcher and transported to Celebration Hospital near Orlando, the tour said. The hospital did not release his condition early Saturday.

Beljanâ€™s best finish on the PGA Tour was tied for third at the Greenbrier Classic in July.Â He has made $527,528 this year playing in 21 tournaments.

1:06 pm ET September 23, 2020 RETWEET
A giant robot based on a character from a classic anime series has undergone testing in the Japanese city of Yokohaâ€twitter.com/i/web/status/1â€¦YJ
cnni

12:33 pm ET September 23, 2020 RETWEET
An entrance to America's most visited national park was vandalized with a racist message, and officials are offerinâ€twitter.com/i/web/status/1â€¦qj
cnni

12:00 pm ET September 23, 2020 RETWEET
Children whose mothers had used cannabis during pregnancy were more likely to have psychotic-like behaviors and morâ€twitter.com/i/web/status/1â€¦qs
cnni